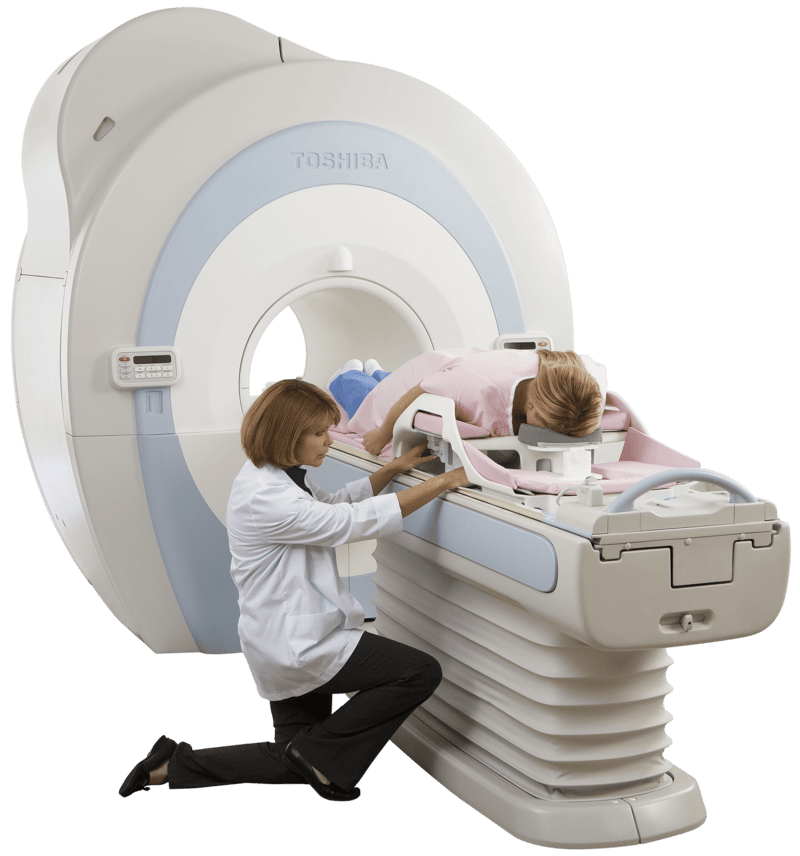 Iowa Radiology is proud to announce the arrival of abbreviated breast MRI, the latest advance in breast cancer screening technology. Breast MRI allows radiologists to more accurately detect early-stage breast cancers, especially in patients with dense breasts. However, traditional breast MRI comes with a high cost that insurance companies typically cover only for patients who are at significantly elevated risk of breast cancer. The abbreviated breast MRI exam is much quicker and less expensive than a traditional MRI, but it can detect even very small cancers with similar accuracy.

What are “dense” breasts, and how do I know if I have them?

When evaluating mammography images, the radiologist determines the level of breast density:

About half of women have heterogeneously or extremely dense breasts. This creates difficulties in identifying cancers on mammography images because while fat is easy to see through on a mammogram, dense tissue, like cancer, appears white. This makes it hard to differentiate potential cancers from the dense tissue. As a result, women with dense breasts who develop breast cancer tend to be diagnosed at a later stage, when tumors are larger and lymph notes are more likely to be affected.[1]

Additionally, women with dense breasts experience a higher rate of breast cancer. While researchers do not yet know the cause of this correlation, it makes accurate early detection even more important for women with dense breasts. As a result, the legislatures in Iowa and other states have passed legislation requiring that mammography facilities inform patients whose mammography reports indicate that they have dense breasts. Recently, the federal legislature also passed a law requiring the FDA to establish similar requirements nationwide.

What’s the difference between a mammogram and breast MRI?

A mammogram uses X-rays to create images of the breasts. In a 3-D mammogram (also known as breast tomosynthesis), the machine moves in an arc over the breast to capture many images from many different angles, which are then digitally synthesized to create a 3-D image that radiologists can examine bit by bit to identify abnormalities in suspicious areas. This allows greater visibility into the features of dense breasts by giving the radiologist a way to see around areas of dense tissue that would otherwise block what lies behind them from view.

An MRI exam, on the other hand, uses a powerful magnet to create an accurate image of the breast. This magnet causes hydrogen atoms in the body to change their alignment in a way that a computer can detect and then translate into a visual image. In contrast to mammography, the accuracy of this image is not affected by breast density. MRI is also considered safer than X-ray imaging because it does not use ionizing radiation, exposure to which is associated with an increased risk of cancer.

How is abbreviated breast MRI different from traditional breast MRI?

Traditional breast MRI, also called high risk breast MRI, takes 30–60 minutes to complete. It is a recommended screening method for women who are considered to have at least a 20% chance of developing cancer during their lifetimes. (Average risk is approximately 12.5%). You can calculate your breast cancer risk here. Iowa Radiology routinely calculates lifetime risk scores which are included in the mammogram report to the referring health care provider.

Abbreviated breast MRI takes 15–20 minutes to complete. It is used as a supplemental screening tool along with mammography for women with dense or extremely dense tissue and is more detailed than whole breast ultrasound.

How do I know if abbreviated breast MRI is the best choice for me?

Talk to your doctor about your breast density and breast cancer risk. If your lifetime risk of breast cancer is 20% or more, then it’s likely that high risk breast MRI will be covered by your insurance. An order from your doctor is required. For patients paying out of pocket, Iowa Radiology is making abbreviated breast MRI available for $449 due at the time of the exam. Discuss the potential health benefits that abbreviated breast MRI can provide you with your doctor to determine whether this option is right for you. Feel free to contact Iowa Radiology if you have questions about exams at our clinics.