How Does the Radiologist Read My Mammogram? 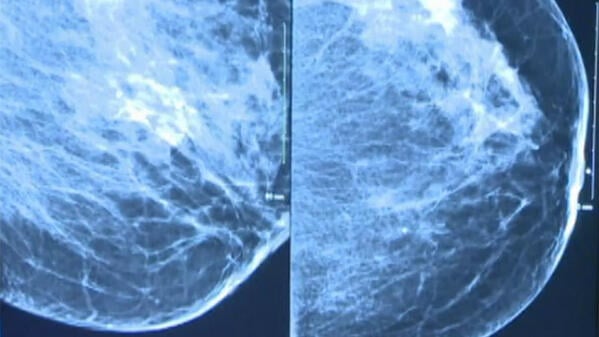 When you have your annual screening mammogram, the radiologist—a doctor with specialized training to read and interpret such images— examines your mammogram and then sends a report to your referring physician. But how do radiologists interpret what they see in mammography images? Today, we’ll give you a glimpse into the types of features and patterns on mammograms that cause radiologists to take a closer look.

At a basic level, the radiologist looks for anything that seems out of the ordinary—like asymmetries, irregular density, clusters of calcifications, or areas of thickening skin.[1] Having past images available for comparison helps the radiologist determine what is unusual or different this year. So, if you’re going to a new radiologist or clinic for the first time, arrange for them to have access to any mammograms you have had taken elsewhere.

A mass shows up on a mammogram as an area within the breast tissue that is denser—has fewer interspersed fat cells—than the surrounding tissue.[2] Many things appear as masses on mammograms, including benign fluid-filled cysts, noncancerous solid tumors, and malignancies.[3] When a mass is detected, the radiologist will typically look at its shape, margins, and density to determine whether it should be investigated more closely.

Masses that have irregular shapes and “spiculated” (spiked), or blurry borders are more likely to cancerous than those with smooth borders and regular round or oval shapes, and denser solid masses are considered more suspicious than masses containing more fat tissue.[4]

Cysts can be fluid-filled or partially solid. Completely fluid-filled cysts are benign “simple cysts” and do not require follow up. However, cysts that seem to contain solid material are evaluated more closely, often with additional imaging and/or biopsy.[5]

Calcifications are common mineral deposits that appear as white dots or flecks on a mammogram. While not cancerous in themselves, some patterns of calcifications may indicate early breast cancer development.

Your mammogram report will also document your breast density, based on how much of your breast tissue is made up of fibrous and glandular tissue compared to fatty tissue (less fatty tissue = denser breasts). Dense breast tissue is not an abnormality, but it may indicate a higher breast cancer risk and make irregularities more difficult to spot on your mammograms. Be sure to discuss any risk associated with your breast density with your referring physician to develop the most appropriate plan for your care.

Particularly in light of recent conflicting mammography screening recommendations, women ages 40 up must be advocates for themselves in obtaining yearly screening mammography. Iowa Radiology strongly supports the continued recommendations of the American College of Radiology and the American College of Obstetricians and Gynecologists that women begin annual mammography at age 40, when breast cancer incidence increases significantly. Annual screening beginning at 40 has been shown to save more lives and add more years to women’s lives than less frequent screening beginning later.

Do you have questions about your mammogram? Click below to check out our free eBook for information about the risks and benefits of screening, breast cancer risk, and low-dose 3-D mammography. Ready to schedule your annual screening mammogram in the Des Moines metro?

Fill out our easy online request form, or contact one of Iowa Radiology’s clinics in Clive, Ankeny, or downtown Des Moines.

The information contained in the Iowa Radiology website is presented as public service information only. It is not intended to be nor is it a substitute for professional medical advice.You should always seek the advice of your physician or other qualified healthcare provider if you think you may have a medical problem before starting any new treatment, or if you have any questions regarding your medical condition.